Due to the current Pandemic, the 2021 Archaeology has been canceled. We are working hard to make 2022 bigger and better!

Thank you to everyone that came out to the

It was a rainy day, and we had to move a lot of stuff inside, but we still made sure to be open to the public and share a good day of learning new things!

Thank you to everyone that came out to the

Here is an article from the Newark Post from this year’s festival. There are some great photos of our volunteers and presenters. It was a wonderful day! 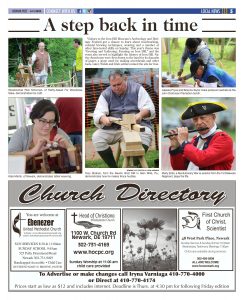 Come on out and explore community history, learn about historical foodways, and dig with professional archaeologist. Watch craftspeople do blacksmithing, woodworking, brewing, and flint knapping.

There is no rain date for this family friendly event, but the forecast calls for a cloudy day.

Admission is $5 for adults, $4 for students and children, children under 4 years old are free, Delaware Academy of Science Members are $2, and scouts in uniform are free. 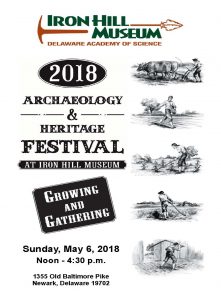 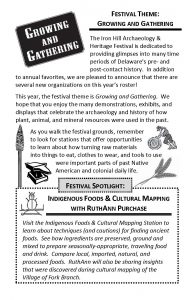 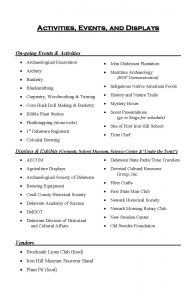 Please see below for the Newark Post/Cecil Whig news article about the 2017 Archaeology Festival!

NEWARK, Del. — When he was 12, Jim Neubauer saw a blacksmithing demonstration and immediately fell in love with the craft.

“The fire, dirt, noise, hammering metal – it’s taking a piece of metal that’s junk and turning it into something useful,” the Aston, Pa., resident explained.

Neubauer spent years learning the finer points of blacksmithing and now teaches them to others. On Sunday, he was at the Iron Hill Museum’s Archaeology and Heritage Festival demonstrating his skills and, perhaps, inspiring someone else to take up blacksmithing.

Several hundred people attended Sunday’s festival, held on the grounds of the museum at 1355 Old Baltimore Pike. This year’s theme was “tools of the trade,” and the festival featured artisans from several disciplines showing off their skills and the tools they use.

All the demonstrations were focused on showing visitors how things were done hundreds of years ago by the people that shaped the Iron Hill area. Native Americans were first drawn to the land for its deposits of jasper, a stone used for making arrowheads and other tools. Later, roughly from 1700 to 1900, Welsh and Irish settlers mined the site for iron.

“We like to explain to people the significance of this area,” said Robin Broomall, a museum board member who helped organize the event. “Lots of people live here and have no idea of the history or why the dirt in their backyard is red – because of the iron ore.”

The featured craftsman was Mathew Grubel, who demonstrated how log cabins were made in the 1700s.

He first became interested in the subject while working at Morristown National Historical Park in New Jersey, where George Washington and the Continental Army spent their second winter of the Revolutionary War. Through trial and error, the soldiers learned to build temporary log cabins to keep warm during the cold winter.

Using a variety of axes and other tools, Grubel measured and chopped logs as festival goers looked on.

“Lincoln Logs make it look simple, but it’s a little trickier,” he said.

“My passion is equipment and seeing how things changed,” Fullmer, of Media, Pa., said. “Brewing is the same as it was in 10,000 B.C., but our equipment has gotten better and more efficient.”